can i do this without creating a CEL?

alright so i'm preparing to do a handful of things simultaneously on my bronco. part of that includes new headers. at the same time, i'd like to replace my entire exhaust.

preferably i'd like to go with a single catalytic converter instead of two. i'm thinking i'd be ok if i dropped the second cat since that's after the 3rd sensor. that would make the order become two upstream o2 sensors, high flow cat, downstream o2 sensor.

that shouldn't create any CELs, would it? i don't know why, but ever since i bought my bronco i thought my initial research suggested i was pretty restricted on what i could do. but going back and revisiting with actual intent of doing something, i think my initial impressions were incorrect.

MS88Bronc said:
That’s the exact config I have. Two upstream O2 sensors, y-pipe modified at the Y to go into a 2-1 cat, and then a 3” pipe, O2 sensor, Flowmaster muffler, then 3” pipe exiting behind the pass side wheel. It never threw any O2 codes. I have an EGR code but that shouldn’t have anything to do with the exhaust config I don’t think.
Click to expand...

now i have to settle on whether or not i keep my existing y-pipe or start from scratch, although i'm inclined to keep and modify as needed. it seems like just cutting the first cat and starting there makes the most sense.

i found some "direct fit" y-pipes with a cat included, but i have seen mixed results on fitment as well as the fact that i don't know about the quality of the converter itself.
► Show Full Signature
my bronco "build" thread
http://www.fullsizebronco.com/forum/57-78-96-build-forum-builds-only/358177-dash_cams-96-eb.html

now i have to settle on whether or not i keep my existing y-pipe or start from scratch, although i'm inclined to keep and modify as needed.
Click to expand...

Yeah, my Y-pipe is the stock one, but it was just cut off before they merged and a some pipe added to go into a 2-1 cat. I may have a pic somewhere let me look.

Here's a pic that sort of shows the cat inlet side. You can see where the two pipes go into the cat - there is a small crossover pipe before the cat also that I forgot to mention.


2.25" downpipes into single 3". I'm running a magnaflow spun metallicat on my bronco. It is high flow, and works well, but is very compact in size and muffles virtually no sound.

ctandc said:
You shouldn't have any issues. And honestly - if you wanted to delete both cats (not saying you should) if you did throw a CEL, all you need to do is get a "CEL eliminator" which essentially threads into the after cat O2 sensor port and pushes the O2 sensor further away from the exhaust stream., thus eliminating the error code.
Click to expand...

That's a defouler, I believe. I'm familiar with those and that's my backup plan. Gonna run one cat, though.
► Show Full Signature
my bronco "build" thread
http://www.fullsizebronco.com/forum/57-78-96-build-forum-builds-only/358177-dash_cams-96-eb.html

Joined May 10, 2010
·
8,910 Posts
funny i have some old cats and scrap places wont take them without a VIN number or some BS liek that

on my old 96 302 i put the downstream in an upstream position and it never threw a code. so apparently its not a very sensitive to changes.

fodder said:
Don't toss the old cats when you replace them. People are going crazy lately buying them up. Someone just contacted me about mine (I didn't have them advertised) and paid $60 for the 2-way and 1-way paperweights. I don't think I paid more than $100 for the new 3-way cat.
Click to expand...

Oh for sure. If anything I'll bargain with the muffler shop for them to keep them and lower the price.

On my old Mazda, I bought a used catalytic converter for something like $100 from a local who replaced it with a race pipe. I took that and gutted it. Saved the guts. Pulled my cat and installed the gutted one. Sold the complete cat for something like $70 and a grocery sack of cat guts for $15.
► Show Full Signature
my bronco "build" thread
http://www.fullsizebronco.com/forum/57-78-96-build-forum-builds-only/358177-dash_cams-96-eb.html

Joined Dec 28, 2012
·
2,547 Posts
Just make sure the O2 sensors are replaced in their relative positions to the exhaust manifold collector. You don't want them too far upstream or downstream. Any remaining hydrocarbons in the exhaust stream need time to burn off before reaching the sensor, which is why it shouldn't be located too closely to the collector. Also, O2 sensors need to reach a given temperature before they send a signal to the EEC. The further downstream they are located, the longer it takes to reach that temperature and the vehicle will run rich until then.

i went to my usual exhaust guy yesterday and then two others.

the take-away
1) the usual exhaust guy (who i have remembered told me before that cutting out one cat wouldn't throw a CEL) said he'd charge me about $220 to cut out both cats and weld in a new cat that i would bring. but that's reusing the y-pipe and the muffler to exit.
2) my 3rd o2 sensor is actually behind the 2nd cat
3) another shop said roughly $300 to do the same thing but they would use their cat. however, they did NOT even look at it. the guy told me he'd have to put it up on the lift to get an exact price. but, he's at lunch so he couldn't do it right now. lol... yea not using those guys
4) the 3rd shop said it wouldn't work b/c it would throw a CEL

after some serious internet digging and a couple calls to magnaflow, i can get an OEM replacement forward cat for about $150 + tax. the cats for the 96 are heavier (more metal) and more expensive than the ones for 95 & earlier. the 92-95 cat is the same shape and size but only ~$100 since it, apparently, has less ceramic material.

i did find a full replacement from magnaflow for about $300 for a 91 bronco. that has the y-pipe, a collector, and then into a single cat. now, i would have to weld in the appropriate o2 sensor bungs but otherwise, are they the same shape from the brick and aeronose years? it's listed for a 91 / 351w / E4OD. i think it should but thought i'd get a second opinion.

i am wavering on the full exhaust replacement for cost concerns. but i would still like replace both cats with one new cat in the cheapest way possible.
► Show Full Signature
my bronco "build" thread
http://www.fullsizebronco.com/forum/57-78-96-build-forum-builds-only/358177-dash_cams-96-eb.html

'92 Custom, '95 MAF 5.0
Joined Mar 9, 2017
·
1,989 Posts
When I did mine, I opted for the clamp sleeves for the cat instead of getting it welded on. I don't see any good reason for a permanent install, unless you've got a show vehicle and you want people admiring the beautiful welds underneath... Being able to unbolt stuff is a good thing, IMO. It also gives you some leeway in exact measurements. So, you could go that route and save some $$$ on the installation cost.

I later went to my exhaust guy to get an upstream leak fixed. The Magnaflow y-pipe was somehow a bit too narrow and not seating properly with the headers' collectors. He did a cut and re-weld to get it spaced properly. While working in there, he never objected to my using sleeves on the cat.

BTW, Eastern Universal 70318 is the cat I used. It looks like they're only ~$60. I was thinking I paid around that when I said it wasn't over $100, but figured I must have been associating the price I got for my stock cats... That's some crazy symmetry, in hind sight.
► Show Full Signature
'92 Bronco Build Thread - '95 MAF 5.0, H5 axle code, York OBA, 3G alt, custom jump seat console, flomaster steps/sliders.
http://www.supermotors.net/28006
C

this is the cat. it's the forward replacement.

MagnaFlow specializes in superior catalytic converter and exhaust technology and each converter is designed to the exact original equipment specifications while keeping the Check Engine Light off.


i wasn't sure if the y-pipe was the same shape outside of the variations in o2 bungs. it looks like they are. i really like that jegs y-pipe.

the preferred cat i would use would be a spun metallic one, but if i used one, i'd have to also buy a y-collector for the y-pipe, which is why i was asking about fitment. that y-pipe from jegs looks like exactly what i'd want...EXCEPT that it's for a 302 instead of the 351. so i'm thinking it wouldn't work w/o modification...

now i've got to go back to the lab and keep researching...
► Show Full Signature
my bronco "build" thread
http://www.fullsizebronco.com/forum/57-78-96-build-forum-builds-only/358177-dash_cams-96-eb.html 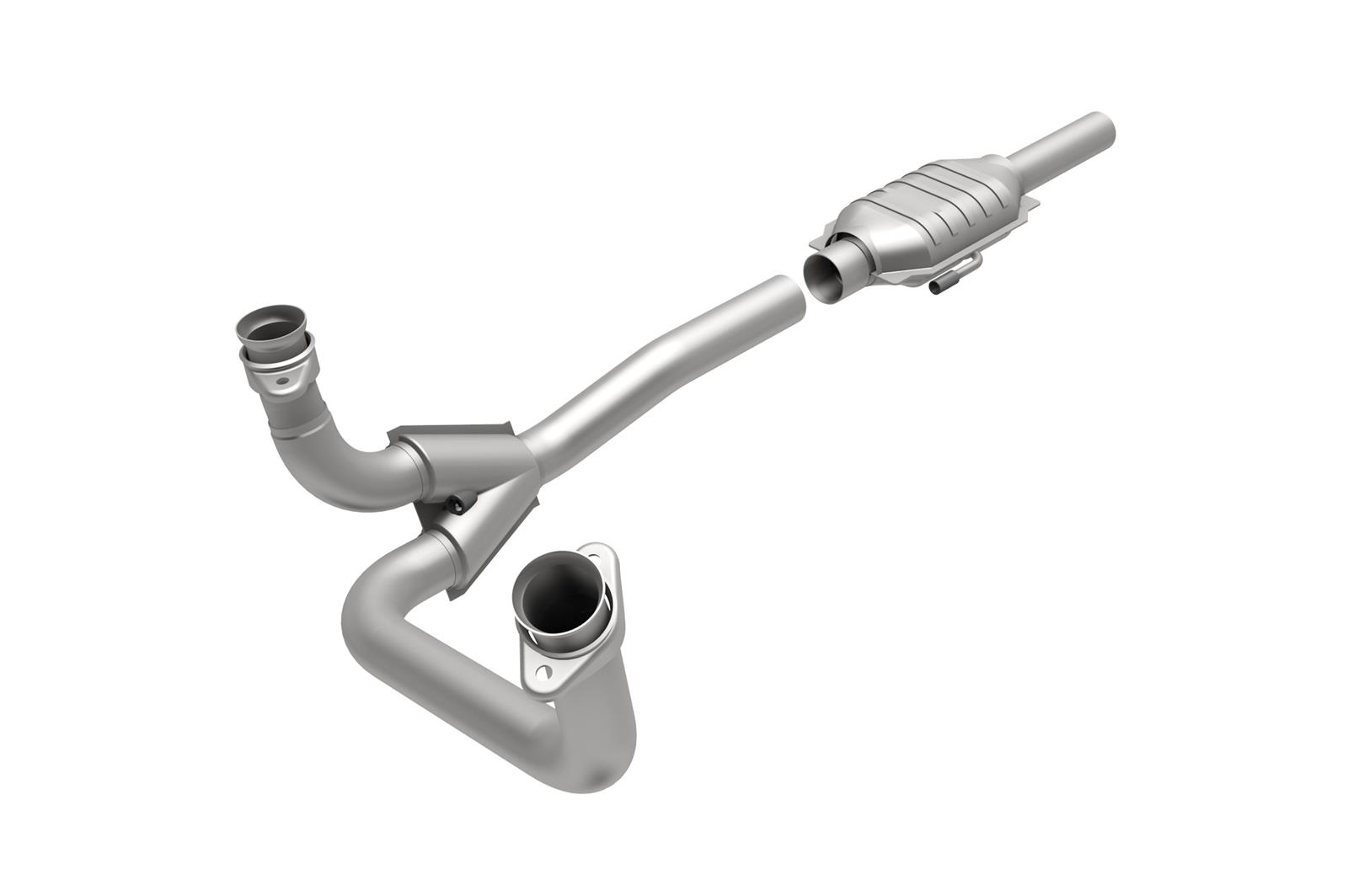 Find Bosal Exhaust Y-Pipes 079-4038 and get Free Shipping on Orders Over $99 at Summit Racing! Bosal exhaust Y-pipes are manufactured to exacting standards and are based on the original OEM design for a guaranteed perfect fit. All Bosal exhausts are made from either aluminized or stainless... 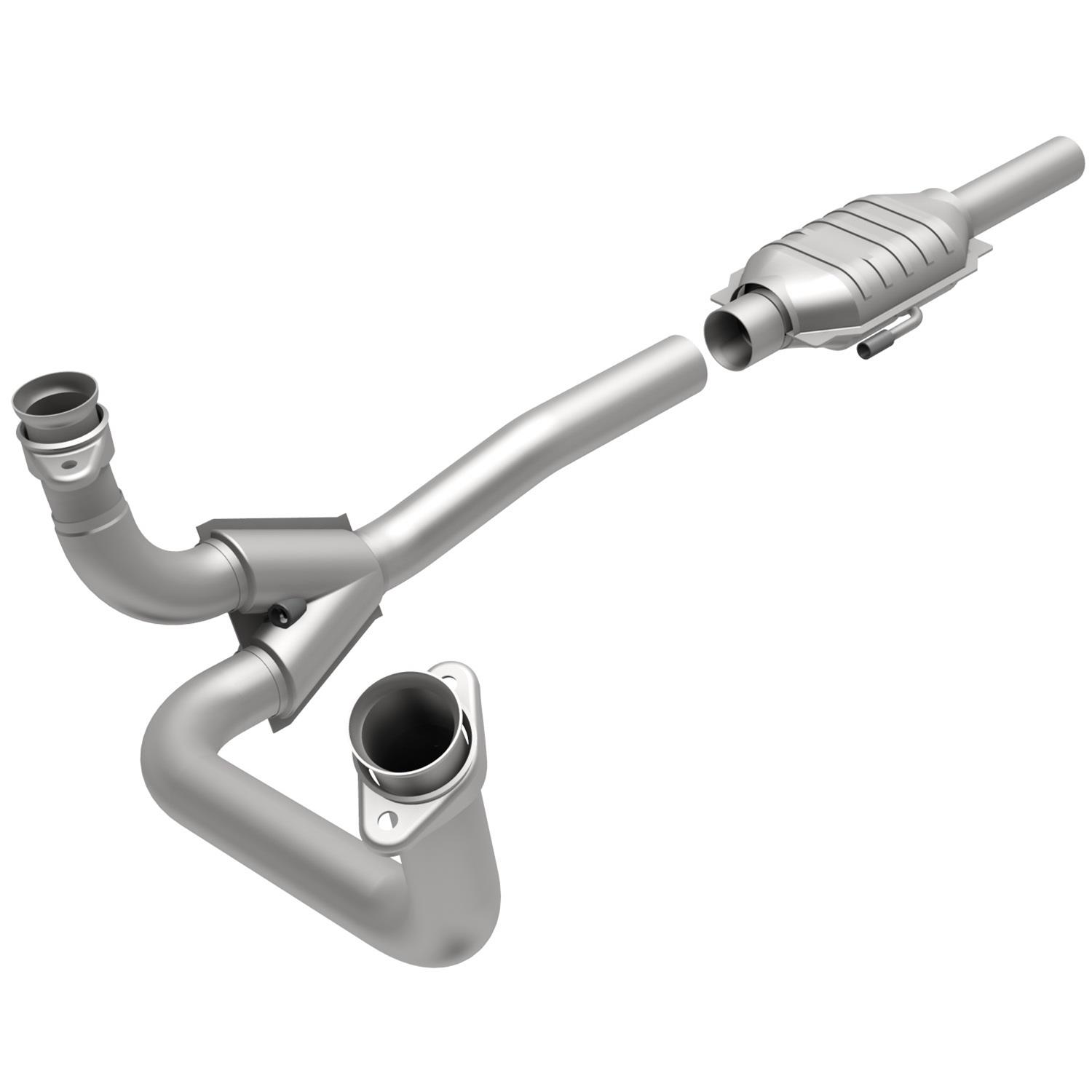 Find MagnaFlow Direct-Fit Catalytic Converters 93312 and get Free Shipping on Orders Over $99 at Summit Racing! MagnaFlow direct-fit catalytic converters are designed for easy bolt-on installation for the professional installer. Welding, cutting, and tube-bending equipment are not required...

notice the pictures are identical. so maybe the bosal is a rebadged magnaflow


if the 91 will bolt up (outside of the o2 bungs and that tube sticking out of the cat - which i'll just close off - then i might get one of those i posted above. .
► Show Full Signature
my bronco "build" thread
http://www.fullsizebronco.com/forum/57-78-96-build-forum-builds-only/358177-dash_cams-96-eb.html