Joined Mar 12, 2003
·
7,805 Posts
I have a Procomp lift. I just discovered my driver side radius arm is broken. Anyone have this happen? I have reached out to procomp hoping for a response

Joined Mar 12, 2003
·
7,805 Posts
well ProComp came through and sent me a replacement radius arm. I placed the request on monday of this week so a 3 day turn around is outstanding.

. unfortunately I didn't specify what color i needed so they sent me a Black arm instead of the Grey arm I had. So i will take this opportunity to get the other arm redone to match. I'm tempted to take the axle pivot brackets off and get them painted as well. Ive noticed the paint/powdercoat is cracking due to years of flexing i am sure.
► Show Full Signature
94 5.8/E4OD Edelbrock efi intake, jba headers. 37" STT Pro's. 6" PC stage II, 4.88 gears, front Aussie. Warn HS9500, custom bumper and sliders. RedHead and TieRod flip.

Joined Mar 12, 2003
·
7,805 Posts
Got the old arm pulled. I’m going to clean up the surface rust on the frame and diff and paint them up. New arm , I got feedback from ProComp saying they can not get these in Grey. oh well.

Question, there is a pad of sorts that sits below the coil spring. mine are showing some wear. where would i get these? I can post pictures if that would help.

I also discovered that my shocks are toast, I am not going to replace the Aux shock. Plan is to run a single Bilstein 5100's anyone have a good site to buy? Amazon shows these for $85/shock

until I got my cut-n-turn reinforced housings:

jermil01 said:
glad to hear hey warrantied them out..what's the condition of the other side? I'd be worried about that one failing similarly.
Click to expand...

the other side looks good at this point. I will be removing it so i can get it painted to match. the heavy powder coating in that area doesnt look cracked yet.
► Show Full Signature
94 5.8/E4OD Edelbrock efi intake, jba headers. 37" STT Pro's. 6" PC stage II, 4.88 gears, front Aussie. Warn HS9500, custom bumper and sliders. RedHead and TieRod flip.

cobrajoe said:
Check your housing and make sure it isn't cracked near the mounting holes. Had one break on me and the housing had fatigued and broke. It ended up ripping the drive shaft apart.

These PC radius arms are pretty tough. Saw a bronco in the JY with em that had rolled a few times. The drivers side as bent like a pretzel, but not broken. Passenger side came home with me.

Joined Mar 12, 2003
·
7,805 Posts
what radius arm bushings should i go with. my passenger side is running a different rad bushing then the drivers side. the drivers side is the 3 part bushing. I found the pass side didnt like this setup so i went with the 2 piece over there. the 2 piece is much thicker bushings and i am only able to get 4-5 threads showing with the nut torqued down. 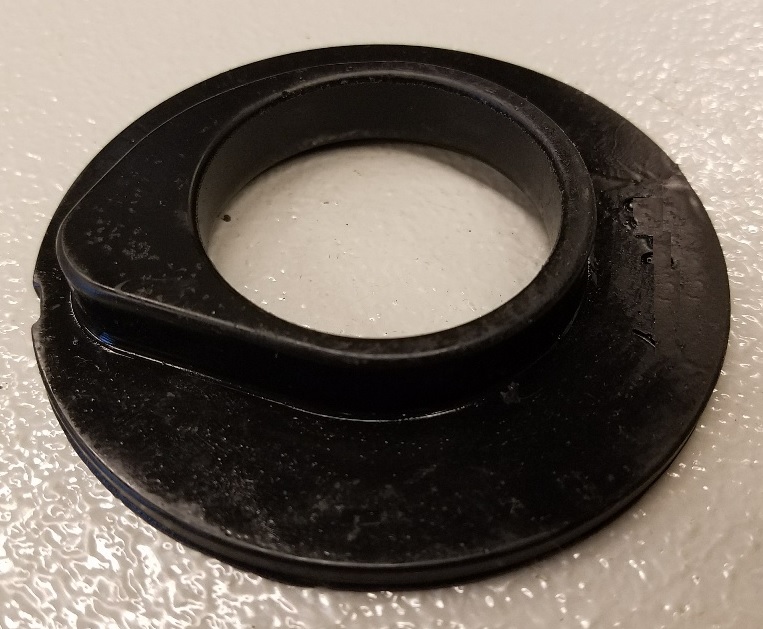 Joined Mar 12, 2003
·
7,805 Posts
I went ahead an painted mine. Thanks for the link CobraJoe... i bookmarked this in the event i change my mind. I got some 5100's ordered and should arrive Wednesday. Everything went together so nicely.
Next task on the list is installing my 6* shims on the rear leafs. I should get started on this tonight.
► Show Full Signature
94 5.8/E4OD Edelbrock efi intake, jba headers. 37" STT Pro's. 6" PC stage II, 4.88 gears, front Aussie. Warn HS9500, custom bumper and sliders. RedHead and TieRod flip.

Joined Mar 12, 2003
·
7,805 Posts
Got the shocks , now I seem to be overthinking the install. The install instructions suck. Anyhow which way do the bushings go. I know one spacer goes thru the bottom eye hole bushing. Does the other spacer go up top over the stem?