However, I noticed right away that there are alignment tabs on the 8.8" housing for the sway bar brackets that are not present on the 9" housing.


With as much highway driving as I do, I'd really like to hook up the sway bar.
Are these NEEDED for the sway bar to function?
Is there a work around?
Thoughts?

AbandonedBronco said:
What are they there for?
Click to expand...

That said, I would personally likely at the least tack weld it in place, in an easy to get to with a cut off wheel spot.
J

1989 Bronco, Eddie Bauer, Raven Black
Joined 2 mo ago
·
311 Posts
@AbandonedBronco What sway bar are you installing? Bushing type?
Also what are you running in the front? Thxs

Joecruiser said:
@AbandonedBronco What sway bar are you installing? Bushing type?
Also what are you running in the front? Thxs
Click to expand...

Hey Joe,
These are simply the stock sway bars that came on it from the factory.
But I'm pulling the 8.8" axle housing out and installing a 9" housing and want to bolt the sway bar back up to it.
J

Joined Feb 21, 2015
·
1 Posts
Try this setup from Desolate Motorsports. They are great quality and also a bolt on kit. We install these in almost all of our builds. I installed it on my Bronco when I swapped in a 9”x 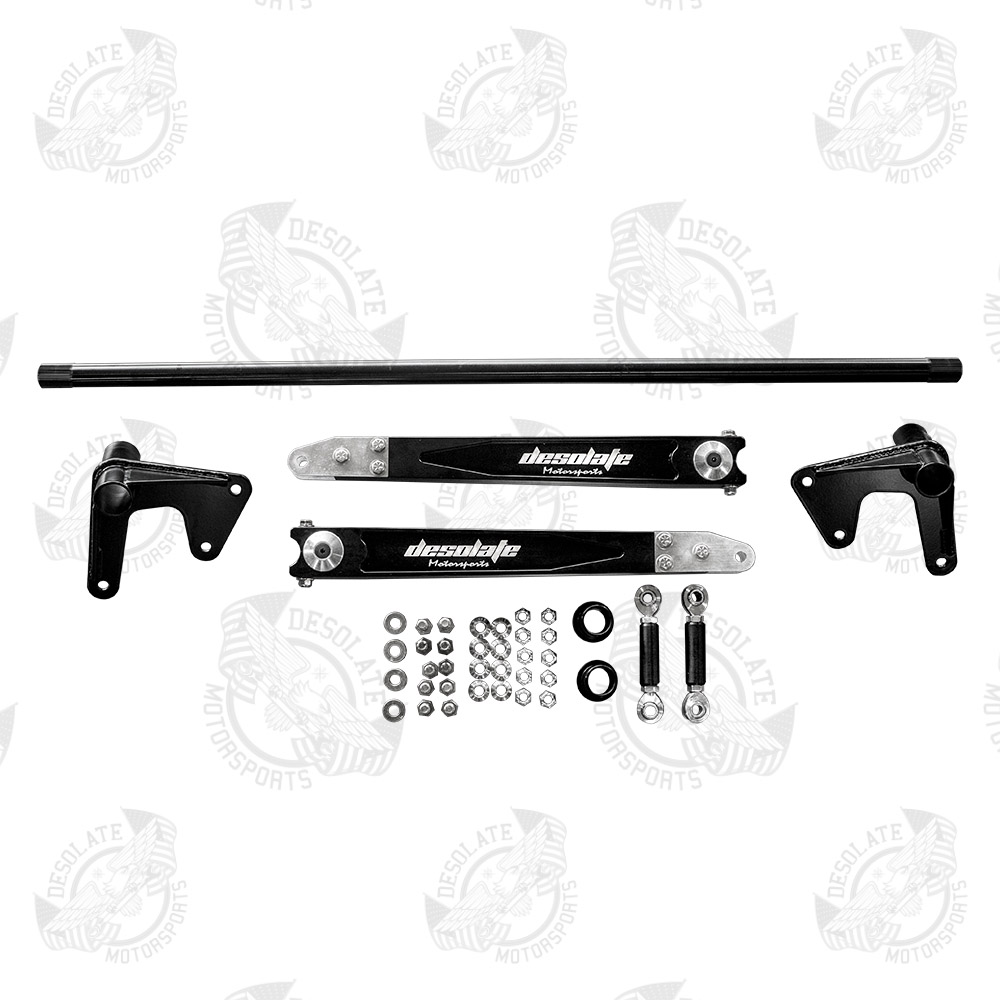 Also, I mostly just slam my junk on rocks, so I'm far from an aficionado of proper street manners, but I've never really noticed a huge difference on the street with or without a rear sway bar. I think the front sway bar does 90% of the work

On the Ford 8.8" housing, there's a bolt hole right on top. This bolts down a bracket that holds both the passenger side e-brake cable, as well as the brake line in place. On the 9", no such bolt hole exists, and there doesn't seem to be any provision for it.

Granted, I do think I have an older axle, as it has the Big Bearing / Big Bolt style with 1/2" bolts (which I figured out when I bought aftermarket retainer plates). I read this was discontinued in '78 or so, so it's older than that. I would think they'd have an e-brake though.

Can someone take a peek for me and see how this is attached?

On my 78 f150, the e-brake cables are located in the center of the frame. Both come out of the crossmember and then down to each wheel. Hard to see, but it's the crossmember for the frame, not bed, that they go through. You can see the broken cable for the passenger side continuing by the top of that shock.

Joined Feb 24, 2006
·
4,794 Posts
Thanks for the pic, looks like they routed it differently. I was curious how Ford did it originally.

Fortunately, there's no real science to it as it doesn't have to be precise and exact. Just held out of the way so nothing catches it. Using a 3rd member bolt was an idea I toyed with too, as long as the remaining thread is long enough.

AbandonedBronco said:
Thanks for the pic, looks like they routed it differently. I was curious how Ford did it originally.

Fortunately, there's no real science to it as it doesn't have to be precise and exact. Just held out of the way so nothing catches it. Using a 3rd member bolt was an idea I toyed with too, as long as the remaining thread is long enough.
Click to expand...

Idk if broncos of the era were the same, or routed like our later Broncos.

You can always get a longer bolt! Or a stud with two nuts, like a dipstick has.

Ha yeah, as long as the cables dont catch on something, your good. I never use my e-brake on anything. Just used the gear that was opposite the way I was pointed downhill. Reverse for facing downhill, and first for uphill. I did use the one in the mustang when the brakes ruptured 25 miles from home. Nothing like doing 70 with no brakes!!!!!! Good thing it was a manual transmission

Joined Feb 24, 2006
·
4,794 Posts
Yikes! Yeah, that sounds like a good time with the Mustang
Worst I had was with that '84 I had for a while. Both pads on the rotors ripped off at the same time and were just studs on steel. Rear brakes were leaking so bad that there was no braking power because it was pure greasy sludge inside the drum from fluid. E-brake wouldn't have helped there! Fortunately I was only a mile from home, and not out on the interstate or something. From then on, I fully rebuild the brakes of any new used vehicle I acquire, I don't care what condition they're in.

Alright, looks like I still have a little more work to do to get the sway bar hooked up. The 8.8" sway bar hooks up where the 9" is starting to flare. So the 3.25" u-bolt won't go around it. You can see the alignment of the bushing with the axle. I think if I get a pair of 3.5" u-bolts, it should hook up just fine.


I was able to get the e-brake cable hooked up though. Had to cut a little off of the original bracket. On the 8.8", this bracket holds both the e-brake and the brake line. On the 9", the brake line is attached to the housing, so for this I only needed the e-brake.

Just used one of the original nuts from the 9" with some blue loc-tit and double nutted it.