Show us what you've got and make us proud!!!

Want to chat with one of the contestants on an upgrade or anything ? Post up here: Chat with the contestants This is going to be a GOOD ONE !!!!! Let the games... begin!!!

My name is Dave and I have quite the story to tell, my Bronco has been through several "alterations" since I've had it lol
Some of you know me, and some don't but I've been here for a bit and actually won FOTM a few years back. I've a couple of build threads, one lasted about 3 years and boy was she a beauty, but all that is history now.

How does a Bronco go from this


and finally to this


Well sit down and grab a drink and we will discover how all this happened!

BigBlue 94 said:
Cant believe we have an "early bronco" in the comp... but we know it's a wolf in sheep's clothing!

Yes we do, but underneath all that skin lives a "Fullsize" Bronco...

Joined Dec 3, 2013
·
86 Posts
Hi guys, what a pleasure it is to be here competing in this beautiful forum of broncos.
Here is my truck, here in Argentina there are very few and scarce (20 or 25) bronco 78-79, my idea is to leave it as original as possible.
In Argentina is complicated, it is very difficult to get parts of American vehicles since there are not many.
I rescued her from a barn, she was lying 100 miles from my home.
I WANT THAT WE WIN ALL.
THANK YOU FOR INVITING TO PARTICIPATE.

Joined Oct 30, 2010
·
1,170 Posts
I bought my bronco over 17 years ago for the simple reason of more room for the family. We had 3 boys at the time. I had bucket seats in the front then. Later when our girl came along I got a split bench from a guy on the forum. I have done many modifications on it over the years to make it more comfortable and road worthy. It now has a vintage air and heat system, I put sound proofing on all the floors and inside the doors and roof. I have painted it twice the first time outside because I did not have a shop. My wife and kids helped do most of the work including all redone interior and body work. It is my daily driver and I am now waiting on my new engine to get finished at the machine shop. My wife also enjoys driving it. She likes the 4 speed transmission. 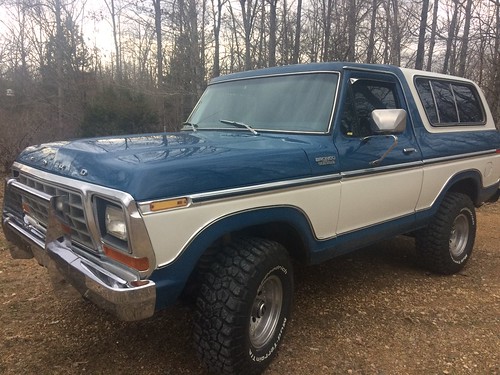 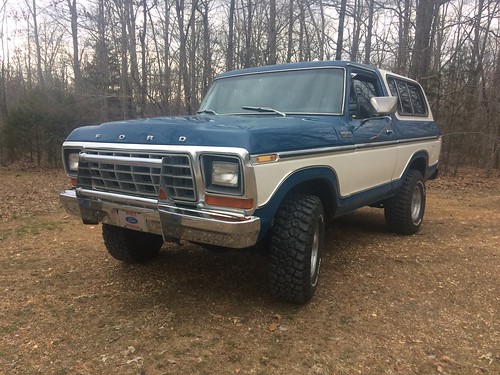 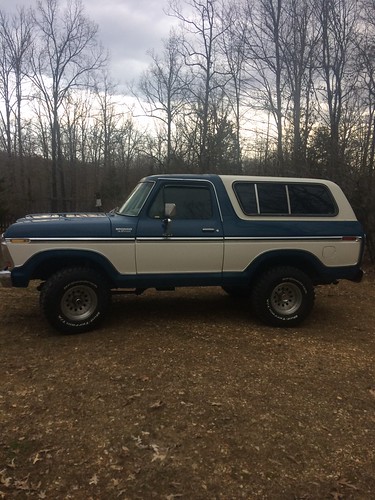 84 Bronco, 351w, c6, custom doubler, np208, 5.13’s, TTB44, 9”, locked f/r
Joined Jan 20, 2019
·
1,226 Posts
Hello, my Name is Nick, and while I am new to this forum I have been wheeling Fords for as long as I can remember. Some of you make know me from my antics in Moab and on youtube. Over the course of this month I look forward to telling the story of my Fullsize, how it has come from being an abandoned truck destined for the junkyard, to being a wrinkled up raisin that I send down the gnarliest of trails and the nastiest of canyons

My first truck(which I still own) was a 93 F150, and while it has done a ton of wheeling, it was too pretty and too big to do what I would consider any hardcore wheeling. So while going to high school, working and doing odd jobs summers and weekends, I was able to scrape together enough money to buy one of the most rotted, rusted 67 Broncos you have probably ever seen. Being in High School still, I had big dreams, but very little time and money. After blowing it apart to rebuild everything and repair all the rust, I quickly ran out of money, became overwhelmed, and very regrettably( especially now seeing current EB prices, man I was dumb) sold it as an incomplete project.
But the fire was lit. I had spent too much time watching Youtube videos of all the different Bronco roundups and trail runs, too many nights dreaming of what could be. Poor white boy budget be dammed, I needed a Bronco I could wheel the piss out of

Fast forward a few years, and the local towing company I was working for got a call to pick up an abandoned 84 Bronco. As it sat in our impound yard for a few months I gathered up about $1000, hoping I was soon to have the cheap project I had been waiting for.
Once the previous owners never showed up, and the lein sale paperwork was complete, I picked it up from our yard for $300


The first order of business was getting it running. Upon first inspection I found the starter was burned out. Upon closer inspection I realized that the exciter wire on the solenoid was wired to direct battery power, and the ignition switch would not feed power in the start position. So it would appear that the ignition switch broke, the previous owner thought wiring the solenoid to be active all the time would fix it, then when that caused it to crank endlessly until the starter died, they determined the vehicle was unfixable and left it.
A new starter and a toggle switch is all it took to have it up and running. I also threw on some junk 33’s that I had laying around

Total cost so far- $366.39
While gutting the interior that appeared to have had unspeakable, terrible things happen all over the carpet, scored a bonus under the seat

Joined Jun 22, 2011
·
2,963 Posts
I bought my original Bronco in June of 2011 for $900, it was a rusted, leaking mess.
It had hideous gold wheels but it ran pretty good.
I started the project by finding and fixing leaks, there were plenty of them, especially since it had sat for several years.

Next I found a clean front bumper and grill for $100 and I decided to paint them, never cared for chrome

And a cute little tach in the dash!

Joined Dec 3, 2013
·
86 Posts
My bronco, had a DEUTZ TURBO engine.
Here in Argentina it is expensive to run on fuel, and many v8 engines were replaced by diesel engines.
I want to leave it original and take out the DEUTZ engine and place the Ford v8 351m, everything is very expensive here.
But I will recover all my money leaving it as original as possible.


On the first trip out I realized that the stock shocks were way to blown out to do anything, except keep the axles from drooping out too far and ripping the brake lines. So I spent some money on new shocks, and on camber/caster bushings to account for the spring spacers throwing the geometry off
Total cost so far- $528.51
Apart from having a, ehrm, male appendage scratched on the hood, the front clip on the bronco was actually perfectly straight. I had a buddy who was looking for a clean 7th gen F-series front clip, with an 8th gen front clip for trade. Since I was just gonna beat on this thing and didn’t care too much, I took him up on his trade. Also installed a 2” body lift and did some fender trimming. And I picked up a cheap set of 37’s from my dad. They had a good amount of age on them, but not too many miles and the tread was decent. If you were paying attention, you might recognize those tires and wheels…


Next was the lift, I would have gone a completely different direction knowing what I know now, but I did a 6" lift from JBG.

Then I picked up a set of 37" Super Swampers, nice!


Let the wheeling begin!
On the first trip out on the trail the rear blocks decided they didn't want to play nice
They cost me the rear driveshaft and a ton of work to get it drivable so we could drive home


The destination was awesome though

Funny thing, I just got done replacing all of my brake lines with stainless steel ones, so I've had a long day. Also new iac valve to fix the idle. The Bronco grind never ends!

I bought this bronco when I was 16. Currently about to turn 21 and already have made many memories.

Here it is when I bought it, and finally a pic showing what it looks like now

At this point my budget was spent, so it stayed like that for a little while, and I used it for mild wheeling on local trails, backroads and canyons. For local stuff like that it did great, but being open diffs front and rear, and only 3.54 axle gears left a lot to be desired